That’s right, I’m back already. 2 posts in 1 day. This time, I’m pleased to be able to present to you all the new cover for Born of Hatred, which is being re-released by 47North on 17th September 2013.

Book 2 in the Hellequin Chronicles.

When Nathan Garret’s friend seeks his help investigating a bloody serial killer, the pattern of horrific crimes leads to a creature of pure malevolence, born of hatred and dark magic. Even with all his powers, Nate fears he may be overmatched. But when evil targets those he cares about and he is confronted by dire threats both old and new, Nate must reveal a secret from his recently remembered past to remind his enemies why they should fear him once more.

Born of Hatred, set in modern London with historical flashbacks to America’s Old West, continues the dark urban fantasy of Crimes Against Magic, the acclaimed first book in the gritty and action-packed Hellequin Chronicles.

The book has edits and changes to the original story that was published December 2012, and is available to pre-order:

I’m pleased to be able to present to you all the new cover for Crimes Against Magic, which is being re-released by 47North on 17th September 2013. 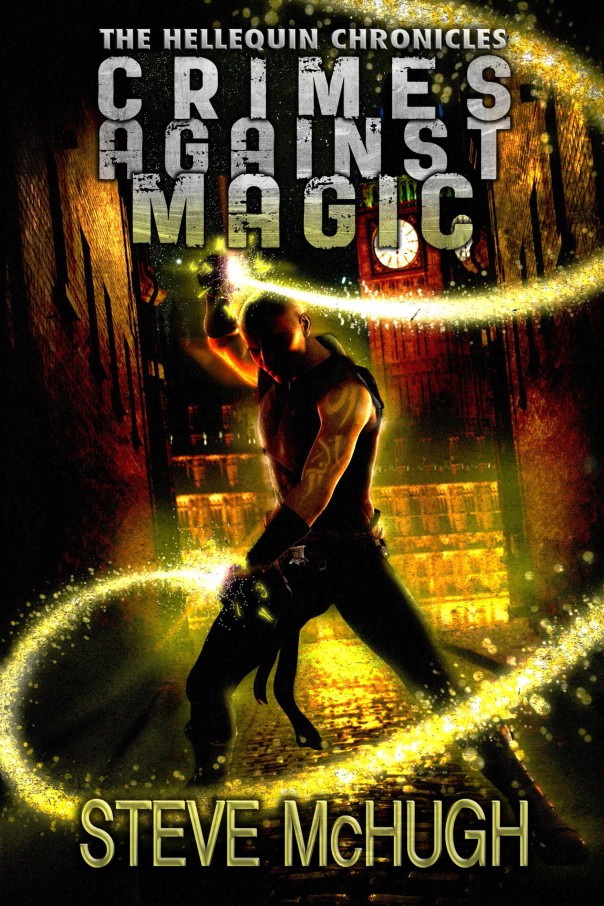 Book 1 in the Hellequin Chronicles.

How do you keep the people you care about safe from enemies you can’t remember?

Ten years ago, Nate Garrett awoke on a cold warehouse floor with no memory of his past—a gun, a sword, and a piece of paper with his name on it the only clues to his identity. Since then, he’s discovered he’s a powerful sorcerer and has used his magical abilities to become a successful thief for hire.

But those who stole his memories aren’t done with him yet: when they cause a job to go bad and threaten a sixteen-year-old girl, Nate swears to protect her. With his enemies closing in and everyone he cares about now a target for their wrath, he must choose between the comfortable life he’s built for himself and his elusive past.

As the barrier holding his memories captive begins to crumble, Nate moves between modern-day London and fifteenth-century France, forced to confront his forgotten life in the hope of stopping an enemy he can’t remember.

The book has edits and changes to the original story that was published April 2012, and is available to pre-order:

So, why don’t you tell us all a bit about yourself?

Steve, thanks for hosting me on your blog! My name is Neve Maslakovic and my time-travel whodunit, The Far Time Incident, was released in April by 47North. Some random facts about me – I spent my early years speaking Serbian, I have a degree in engineering, and I now live with my husband and son in the snowy North of the U.S. (the state of Minnesota, where it’s a humid and sticky 97 F/36 C today — our winters are cold and our summers hot.)

Can you tell us a bit more about your book? Where did the idea come from? How long did it take to write?

The story begins with Julia Olsen, the science dean’s assistant at a small-town research university, being tasked with helping Campus Security Chief Nate Kirkland in his investigation of a murder in the time-travel lab. When someone maroons the investigative team in the past, at the foot of Mt. Vesuvius just as the volcano is about to erupt, they have to figure out who and how to get back. The book took a year and a half to write from start to finish, including a research trip to Pompeii. I didn’t outline the story in advance – it just sort of developed as I was writing it.

How did signing with 47North come about?

My first book, Regarding Ducks and Universes, was published by AmazonEncore in 2011, back when that was the one and only Amazon imprint and 47North didn’t exist yet. Alex Carr was my editor there, and when he moved to 47North, I came along, too.

What has been your favourite part of your writing/publishing experience? The scariest?

What is your writing process? Do you follow a regular routine?

I get my best writing done in the mornings, so I try to keep that part of the day dedicated to meeting the day’s word count. After lunch is when I attend to the other parts of the publishing life – returning emails, updating my blog, designing and ordering bookmarks, that kind of thing.

Do you have a favourite scene from the book?

My favorite bits in a book tend to be the small moments, unplanned ones that grow organically as you write the scene. One that comes to mind from the book is when Julia and Nate are outside a Pompeii shop and Nate admits to not being very good at wrapping birthday presents, which isn’t very relevant to the big-arc plot line but serves to help Julia and Nate get to know each other better. She in turn reveals that she’s not very good at cooking, which leads to Nate promising to make dinner for her one day, which he does end up doing.

Do you have any other projects in the pipeline?

The Runestone Incident, the sequel to The Far Time Incident, is currently in the editing stage. It’s due out in February of next year!

Do you have any advice for other writers?

Write first, worry later. What I mean is, protect your writing space. Get the words down on paper first and leave the concerns of the business side of publishing for later, the part with the agents, editors, contracts, reviewers, sales numbers, and so on.

And now for a few fun questions.

What skills do you possess that would help you survive a zombie apocalypse?

None. I would be totally and absolutely useless. I don’t possess any survival skills. I can’t function if I even skip one meal, I don’t know how to light a fire without a match or how to grow my own food… I’d probably need a How to Survive a Zombie Apocalypse for Dummies guide.

If you could choose any one book to be made into a movie, what would it be?

Hmm… Maybe another go at The Hitchhikers Guide to the Galaxy?

You can be any comic book superhero – Who would you be?

Is there one who can clone himself/herself? That would be the superpower I would want, I think. Then one of the Neves would get to write all day while another Neve did the fact-checking and returned emails, and a third Neve did the dishes and the vacuuming… And maybe they could rotate so it would all be fair?

And that’s it. Thanks to Neve for taking part. If you want to learn more about Neve and her work, or you want to read her books, I’ve added the links below. Go read and enjoy.

Regarding Ducks and Universes

On sunday I was lucky enough to attend an Evening with Neil Gaiman. I’m a big fan of his writing, in fact he’s written 2 of my favourite books of all time in American Gods and Good Omens. I never read Sandman (yes, I know), as I was only about 10 when it started and was more interested in X-men and the Steve Jackson/Ian Livingstone’s Fighting Fantasy books.

This is one of the first books in the series that I got. I managed to find in in Oxfam for about 10p. Bargain.

There’s not a thing about this book I don’t love. It’s utterly fantastic.

Anyway, Neil was an excellent host and spoke about his life growing up in Portsmouth, alongside his writing and working on Doctor Who. He read from his book, “The Ocean at the End of the Lane”, which sounded very good (I won’t be reading it for a while as I’m under orders to read The Stand, which I’ve also never read).

I’m looking forward to reading it.

It was an excellent evening all round, and then came the Q&A bit. At the end a woman in the audience asked Neil what he’d sacrificed to become a writer. His answer was the first time I’d heard another writer say what I’d always thought. That writers are somewhat detached from the rest of the world.

Now what I mean by that, is that when a non-writer watches the news or sees something good or bad happen in front of them, or to them, they respond in the normal way; anger, happiness, sadness, whatever that emotion might be. A writer’s brain will do this with 75% of them, but that remaining 25% is thinking, “how can I use this in a book?” or “that’s interesting information, I must file it away for future keeping.”

As I said, I’d never heard another writer talk about it in such a candied way, and it’s nice to know that I’m not the only crazy person out there. From talking to other writers, it appears that actually this is a common theme. So I’ve gone from thinking I’m slightly nuts, to actually being normal. Albeit, normal within my peer group of writers.

Which in some ways, is actually more concerning than it was to begin with.