← Guest post by Charlie N. Holmberg
Q&A with me. →

I’m pleased to introduce Lesley Smith. Her new book, The Changing of the Sun, is out now. 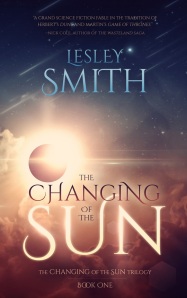 It’s been a strange fifteen months. I started writing a short story in June 2013 to try to flesh out some backstory for an urban sci fi novel I was planning. I was writing for myself, to understand the flows and timelines, and now in October 2014, I’m holding a copy of the paperback of The Changing of the Sun in my hands.

(And then I put it down because, you know, it’s heavy and I have RSI.)

I had a story which gripped me and that I needed to tell, the first piece in a larger picture spanning milestones on an alien planet. First novels usually come back to haunt their authors, usually because they’ve since grown as a writer, and yet I’m still in that phase where I know Changing might not be the best thing I’ve ever written (that’s still to come) but I’m still proud of it and myself.

Indie publishing a novel is a wild ride, especially when you add a Kickstarter campaign into the mix. I’m retired to to chronic health problems and physical disabilities which means I live on a small but comfortable amount. The problem with this is I could have paid for the book’s production but it would have taken three times as long and I really wanted to have a novel published in 2014.

The actual campaign was a horrifying dreadful thing. I danced from manic terror that my project was going to crash and burn and wanting to quietly press the ‘cancel campaign’ button to convinced it was going to succeed and screaming like a banshee. I had people telling me it was going to be okay but it was only on the day I funded that I truly believed them.

Most of my friends were supportive and not all of their support involved money. Half go them were simply curious or keen to see me succeed, even if they could only offer good will and moral support. A friend came round the night I funded with a bottle of prosecco and was there for me after a family member, disgusted, had told me how ashamed of myself I should be for begging. Coincidentally, that particular comment spurred me to hit the internet and I funded that say, almost as an ‘up yours’ to anyone who doubted me.

So I started researching other campaigns, seeing how authors had used the platform specifically. I listed what I needed (editing, covers, layout, an ebook edition) and priced up how much it would cost. Of course you can guesstimate but until you do go through the process you can never have final numbers. I actually needed around £2250 to cover alls the costs I incurred (I asked for £1250). One of the things I wanted to be clear about from the off was my honesty and openness about finances, the reasons why I was doing the Kickstarter and the slow, ambling journey of Scrivener file to paperback book.

Of course much of this was coloured by the people I found during my journey. I found an excellent editor who loves my work, thanks to other indie authors I discovered that interior art really makes for a beautiful book (and Ben J. Adams is worth every penny I throw at him) and that if you’re going to do a paperback or an ebook, it should be a beautiful thing regardless of the cost.

This year has been precious because it has seem my dream become a literal reality, it’s made me realise that I might actually be a decent storyteller and it allowed me to control the final product, to make it as lovely to hold as it is to read on a Kindle or an iPad. I was lucky enough to have Michael Bunker as a mentor and he and I share a believe that books should be beautiful things. I’ve kept this idea close at hand from everything from the cover to the layout and the interior illustrations.

I’m already planning my next two Kickstarter campaigns to get the funding I need to do the second (for The Parting of the Waters, which is live now) and third parts of the trilogy (which will be Kickstarted next summer). For someone in my situation, Kickstarter provides funding but — perhaps most importantly — it also provides an instant fanbase. If I didn’t have Team Changing (my original team of backers), I wouldn’t be able to sit here today signing books and getting ready to do this all over again.

The world is shifting and only the blind have eyes to see it.

In a seaside village, a woman has come back from the dead, the only survivor of a tsunami which wiped out her clan. When she speaks, it is of things no Kashinai should know. She says danger is coming and only an Oracle can save them…one who has not yet been called.

In Aiaea, a city infected by fear, a priestess finds herself blind and afraid. Denied her mantle, Saiara is imprisoned by the woman who should have been her teacher. What Saiara has seen cannot be stopped and unless she acts, an entire world and its people will burn.

Their only safety lies in sacred caverns far to the north, but first Saiara must escape captivity with only the aid of a former High Oracle, a healer, a bondservant, and a Seaborn woman who is indwelt by the goddess of death.

Oracle and indwelt, healer and nomad, child and adult…the Changing of the Sun is coming. Will they be ready? Will you?

The Changing of the Sun is the first installment of a breath-taking trilogy that spans lifetimes and ages from veteran journalist turned author Lesley Smith.

Bio:
Lesley Smith worked as a journalist for nearly a decade before reinventing herself as an author of science fiction and fantasy. She lives in a quaint Norfolk town with three cats and her guide dog, Unis.
She is currently crowdfunding the sequel, The Parting of the Waters, and is asking everyone—rather than buying her book on Amazon—to pledge to her Kickstarter instead and get a signed paperback or e-copy that way.
Links
Lesley’s official site
Amazon
Kickstarter
Goodreads

← Guest post by Charlie N. Holmberg
Q&A with me. →