Yeah, this is probably going to make someone yell at me.

The original Ghost in the Shell was one of the first anime—along with Ninja Scroll and Wicked City— that really got me interested in anime back in the mid 1990s. In fact I watched it again only yesterday, and it still holds up incredibly well. It spawned a sequel, a TV show; Stand Alone Complex, which is amazing, and another Tv show; Arise, which I haven’t seen yet. In short it’s a classic, and rightly credited with helping to make anime better known to the masses.

If I’m honest, I had little hope for a live-action version made in Hollywood. They’d have the budget, and probably throw good actors at it, but I doubted they’d be able to pull it off.

Then they cast Scarlett Johansson as Major, and that went down like a lead balloon. I don’t really want to get into the whitewashing debate, but I will say this, they should have cast an Asian woman as Major. That’s not really a big surprise, Major is Japanese after all (and I’m not interested in anyone saying “but she doesn’t look Japanese, that’s not a valid argument and you know it), and being Japanese and living in Japan plays a huge part in the original.

The problem was compounded when it came to light that the studio wanted to make Scarlet look more Asian by digitally screwing around. And on top of that, part of the film deals with her being white in the most ham-fisted way they could possibly imagine. I literally facepalmed when it happened. Seriously, Hollywood, if you’re going to take a non-white character and make her white, just change the whole story so it doesn’t remind everyone of the problem for a large part of the film.

So, yeah, that wasn’t a great start to a film I had no interest in seeing. But as a fan of the franchise, and also of Takeshi Kitano who’s amazing in everything ever, I decided to go watch it. And it’s good. Actually in parts, it’s really good.

So, the negatives (apart from the above). The villain sucks. He’s just not as interesting as the Puppetmaster, and that leads into the biggest problem with the story in that it’s much more overt about everything that happens. The original had little hints and moments where you weren’t quite sure what to trust. This is a lot more neon signs pointing at the badguy. I prefer the subtly.

The ending falls flat too. It’s just sort of a, “oh is that it?” moment, unlike the original. I know it’s a different take, but it’s just really a bit meh.

Now for the good stuff.

Apart from a few occasions (and they’re really bad), the CGI is excellent. Good job all around there, future Japan is both beautiful, and overwhelming. The dirt and grime of its underbelly is brilliant here. It captured the feel of the original film well.

The music is phenomenal. Just absolutely beautiful stuff from Clint Mansell, and I will definitely be buying the soundtrack when it’s out.

Takeshi Kitano as Chief Daisuke Aramaki is wonderful. He’s a badass who takes no shit from anyone, while at the same time staying several steps ahead, and that’s exactly what the character is. I could watch Takeshi Kitano in pretty much anything, but his scenes in this almost steal the film.

Michael Pitt is very good too, although not in it much, he does a lot considering he’s mostly CGI.

Pilou Asbæk is brilliant as Batou. It’s a spot on performance. As is Chin Han who plays Togusa, and although at first it was strange that he was much older than in the anime, it really does work well.

Juliette Binoche is great too, and really does make you care about a character who may or may not have the best moral compass. 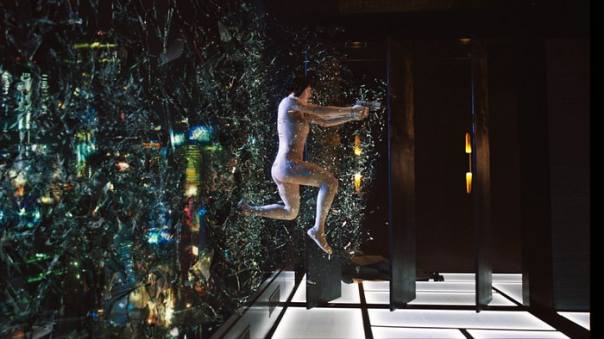 So, now to Scarlet. She’s very good. There are occasions, like all films she’s in, where Scarlet plays Scarlet, but for the most part she’s an excellent Major and has the mannerisms and action scenes down perfectly. The action is beautiful too, with some stunning set pieces (and more than almost one frame for frame shot of the original).

So, over all it’s a strange film. It’s very good, very accomplished, and the film flies by, but it’s no where near as good as the original, and Scarlet’s part could have (and should have from my point of view) been played by an Asian woman.

If you can get over that, this is a good film, with some brilliant performances, and incredible visuals. But I’m of the opinion that if you’re going to remake a classic film, you’d best make it better than that classic. And this film simply isn’t good enough to be held up next to the original. It’s very accomplished, and a lot of fun to watch, but the original, and Stand Alone Complex, are considerably better.

I know this might not read like a recommendation, but it is. It’s just a recommendation with a huge asterisk on the bottom. If you like action films, or don’t care about the anime, this is probably for you, but if you hold the anime up as a great film, or the casting bothers you, you’ll probably come away less impressed.